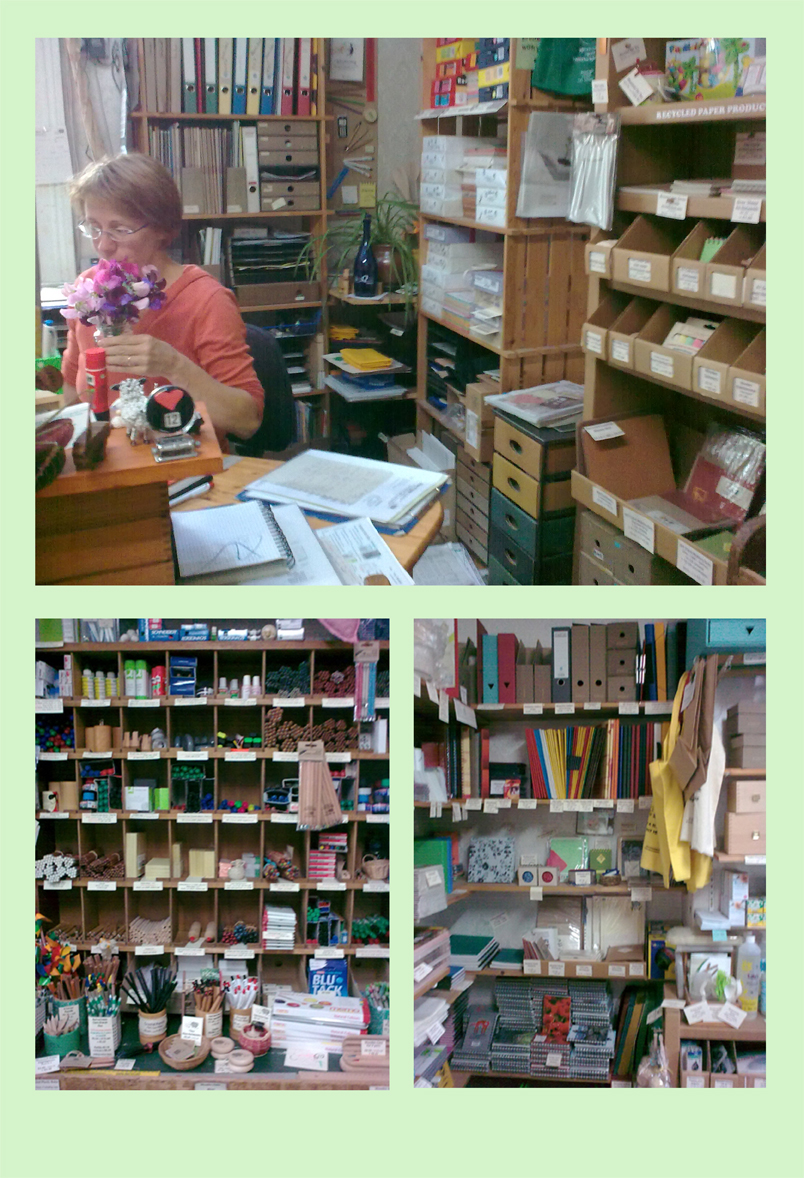 Thanks to Juliane in Klee Paper for having me in for tea and a chat. Feel free to have tea with your neighbour and share their story as a guest post too. It’s a good excuse to be nosey and get to know them better. Everyone has a story.

It doesn’t matter how you pronounce it, It’s german and is our family name. Paul Klee was an artist, and it means shamrock. When I started the business my husband thought I should use a foreign name because at the time irish people liked what is foreign better! And so that’s why we came up with that name, because of the connection with the shamrock and the family name. Ten years later we thought we should change it because my surname is Greene now and it would have been perfect to call it Greene Paper! But too late, the name was around too long

When did you start it?

We started in 1988 officially, because you couldn’t buy recycled paper here.

Nowhere. At that time there was nowhere to bring my batteries, to separate waste…
And you had had all those facilities in Germany?
I had grown up with it. And for me something you had done since childhood or as a teen…I couldn’t put a battery in the bin, I brought them back to Germany, [laughs] I just couldn’t put them in the bin! And you think, “This goes into a landfill? And it shouldn’t be in a landfill.” That’s why education is so important; once you learn to separate waste it becomes the natural way to do things.
So I couldn’t buy recycled paper anywhere and my husband said well you have nothing else to do why don’t you make contact with suppliers, get samples and go round to shops. I went around to health food shops and said, “You should sell recycled paper and this is what it is, would you like to give me an order?”
And some of them did. Cornucopia, which was a health food shop 20 years ago and is now a vegetarian restaurant, Down to Earth, which is still there in Georges Street, but who don’t do stationery any more, and there was a stationery shop in Nassau street. And they all placed orders, they were the first shops.

So it all started in Dublin, do you supply nationally now?

Whoever orders! We shipped something to Japan even. Somebody absolutely wanted what we had and couldn’t get it anywhere else. Sometimes we send stuff to England. We get enquiries from America, but I always warn them about the duty. I don’t want to be unfair, its awful if you receive a parcel and then have to pay duty, and unfortunately we can’t even estimate what it would be, it’s very hard to know.

What do you love about the business?

The environmental issues. After we delivered to shops, we had a newsletter. We thought we should inform people why they should use recycled paper and where they should bring their waste paper, which was very hard at that time, and that newsletter was picked up and then guys and girls from offices said, “Oh we want to use recycled paper”. And then that’s how it spread. And of course Greenpeace was in Ireland at that time and with their campaign issues and things. I had quite a good knowledge about the differences between recycled and virgin paper, and what it saves, not just in trees, but also what it saves in water and energy. And I thought it absolutely makes sense and why don’t we do it. And if people never use recycled paper they will never get separated waste collected so it has to be a loop. It was something which definitely just made sense and I thought, this country doesn’t have this, and we can give it to them.

Tell us about the paper made from elephant poo?

The shops always want something new and something different. And the mass of paper goes to offices for copy paper, that is really tonnes and it would really help the environment for that to be recycled. But then to tell people it doesn’t even just have to be made from trees, there are other crops you can make paper from. We had seen a source where we could get this at good value, and we thought it will be fun! And it is a source of income for someone, it’s fair trade, and that is very important for us. It’s not just that we would buy anything from India or Asia, it has to be ethically sound. And that’s why we buy through wholesalers that are certified. And a fair trade organization offered this paper and we thought great.

And does it sell?

It certainly did, at a time, it was given a lot of attention and picked up by RTE, there was wrapping paper and gift bags, but at the end of the day, people don’t write anymore, so its more artists and arty people who make cards, and card makers who are interested in that kind of texture and fibre because its quite fibrous.

What are your favourite things that you sell or make?

I love the notebooks. Because notebooks are something that everybody uses still, despite the computers. Although probably less because people have notebooks in their computers and in their iPhones and whatever and put their notes there, but still. And the notebooks are something that we produce here. We import the papers, and lovely covers, and we print the covers here ourselves and its very creative. We can chop and change and always have something different and something new, ruled and plain and different sizes and really exciting earthy looking covers, or put something funky on them, it’s a nice part of business, producing something.

I bought one from you a few weeks ago. And it was great how much choice there was. Mine is exactly the right colour and size and paper! I love it. I’m using it lots!

What’s the biggest or most time consuming part of running Klee paper? Is there one thing that you have to spend most of your time doing to run Klee?

No and that’s the nice thing. The business is an ideal size where everything can be done by everyone. We have lots of part time people because initially I did it part time and it’s a great opportunity for somebody who …I think working in an office room from nine til 5 every day is very boring and I thought, if somebody has an interest in something else, and can work part time here, it gives them an opportunity to pursue their other interests too. And we have different people then and they give their different input. The business is laid out that, if someone rings looking for the accounts department we say, “Ok hold on one moment”, and go back and say, “Yes here I am.” And purchasing, everyone can even do that, though it’s mainly done by myself but everything is discussed. So everyone’s job is very spread between accounts, purchasing, goods, looking for new products, buying them in, arranging freight, unloading, packing in, re arranging, selling. There are equal amounts of everything. So there’s no one thing taking over, it’s very well distributed.

Is there a hope for a recycled future in Ireland? Is it going that direction or the opposite direction?

No it will, because of one thing that I thought was good for Ireland and that was joining the EU, apart from its handy to have the one currency but, also the laws which were brought in which Ireland had to do and one of them was recycling. And we can complain to Europe about breeches. It helps. And the same for water directives and all sorts of waste and sewage and landfill regulations, all coming from Europe, and we are a part of Europe so we have to play our part. And I think its really good and therefore we will be pulled in that direction. Whenever I talk to English people they’re surprised and say, “Oh Ireland has so much more recycling facilities”, and so on and I think its because they’re not forced by Europe to do more. I get news about great recycling facilities in England but I think it’s very local, it depends what the local county councils are doing.
Waste can’t go on forever, or one day we’ll have more waste than people!
And so it’s not just recycling but also to produce products that are biodegradable. Plastic is the worst crime because hundreds of years later, it’s still there. And the amount of rubbish we create which will not break down, it’s frightening.

And last question, how do you take your tea? Do you drink tea?

I prefer coffee, I’m a coffee drinker but I am trying to drink more tea because I am told coffee is not healthy and it kills the vitamins you eat. So I’m trying to convert a little bit to tea.

Everything. So the black tea has to be very strong so to taste a little bit like coffee! Other wise the green tea.

Milk or sugar in the black tea?