#Right2Water Protest, So Many Things I Feel Weird About 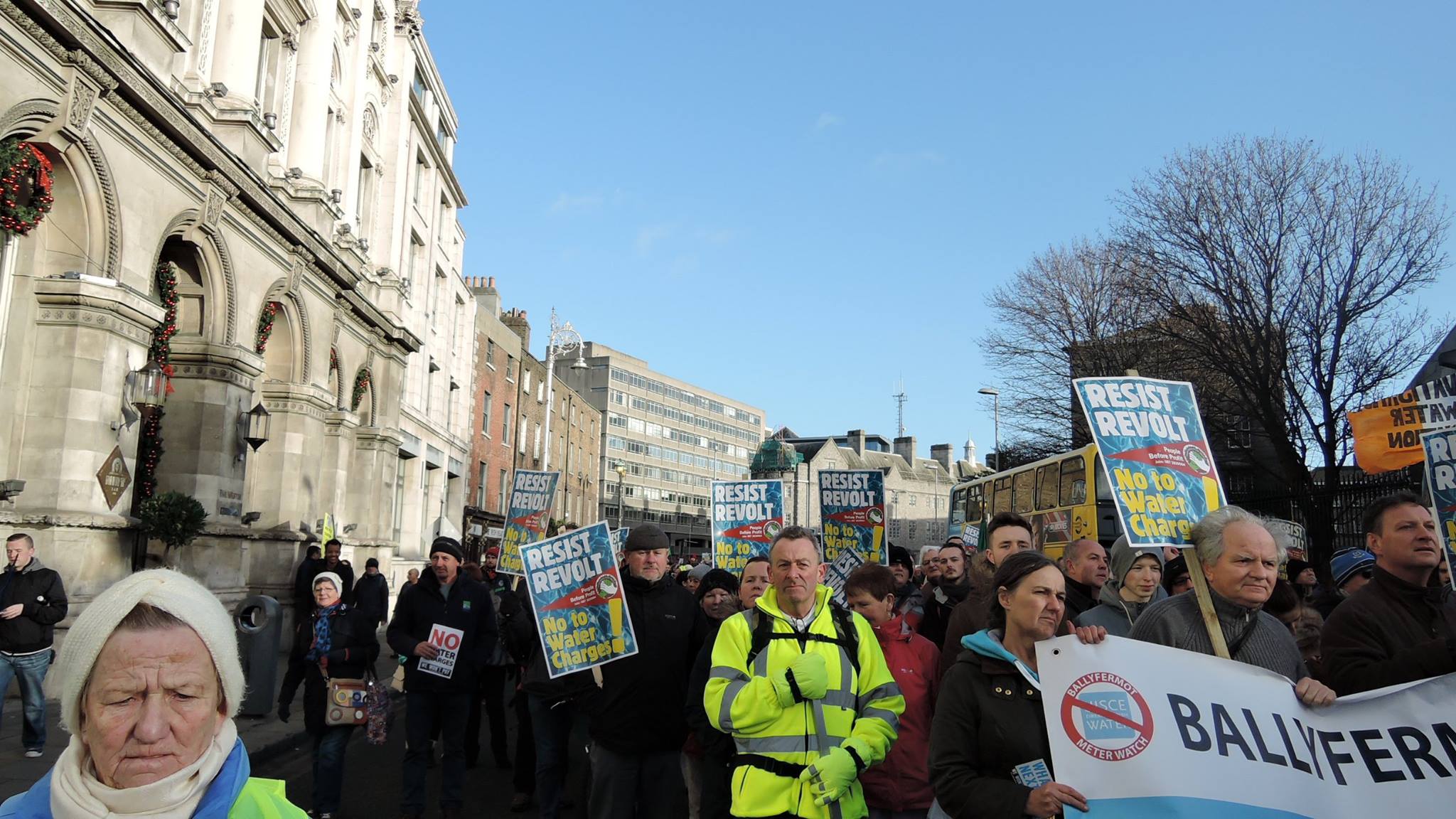 I’ll be honest. I wasn’t planning on going to the protest until when on a luas into town, half the country got on at Heuston station and I thought, Ok, let’s go have a look. There are also lots of aspects of the whole debate i don’t know enough about to argue on whether we should or shouldn’t have them.

But there are things that seemed seriously wrong with how today went down that left me in shock. This does not feel like the country i thought i lived in. Forgive me for being melodramatic but it was too many ‘small’ things. I wasn’t seeing in reports online in mainstream media, of what i was actually seeing on the ground, (and i recognise that being in the midst of it would feel different anyway and accounting for that) so i’ve put together my little rant-list. And i’d like people to comment/tweet/whatever and correct me where i’m wrong or where i’ve missed things so i can feel less bothered about it all. Because i don’t want to believe any of these things were what they felt like.

1. We didn’t get our registration pack, so i actually emailed them to ask for it, being a nice little rule abiding person and actually just wanting a look at it. It took weeks and weeks for them to come back. This is an indicator that an organisation isn’t set up or running well. I understand business process management to some degree and in that context, this is a massive fail and as such, i would see it as a symptom of bigger problems with how it’s run internally. The data protection problems are another visible issue. So as an organisation, they’re already messing things up and slow to respond to someone who was going to sign up! Bananas. This is not a well managed system that is going to efficiently add all the water meters and fix all the leaks and give you great value for your ‘€3 per month.’ As i understand it, bigger problems are likely already embedded in the culture. What company in 2014 doesn’t have a data protection officer?! The hell. Anyways. Ranting.

2. Privatisation. I don’t really have any better points to make on this other than I’m just really not comfortable with water being privatised. At the moment Irish Water is a semi-state company i think. So they half care about you/enjoy some lovely government protection i’m sure, and half care about their shareholders. Could it be totally privatised? Fergus O’Dowd seems to think it’s a concern.

“Fergus O’Dowd said there was good reason to be concerned about the possibility of Irish Water being sold to private hands. The Fine Gael TD made his comments in the Dáil in the early hours of the morning, as TDs debated the Water Services Bill.

“We have reason to be concerned,” he said. “I am convinced there are other forces at work here – not necessarily political forces – that are active and they do have an influence.”  [Voldemort?]

He said he wanted a ban on privatisation to be included in previous legislation, but that proposal was deleted.”

Voldemort joke aside, that is the most corrupt looking sentence and it creeps me out.

This is what happened in Bolivia after they privatised water. They protested for four days. At that point water charges were already in place and after privatisation, increased by 50%. Here however, we are all of course thoroughly enjoying the privatisation of our waste collection! Which keeps increasing, getting worse and worse at actually collecting things, not even supplying enough bags to shops in greyhound’s case, replacing stickers with bags so that you can’t use a slightly bigger bag. Their bags are also nicely prone to breaking, because profits are important so don’t fork out on bags people can actually carry to their front door without them splitting. That’s what privatisation of something feels like i think. So imagine that but with water. And then there’s that awful documentary about what happened with the electric co being privatised somewhere? And they keep shutting off power on purpose to increase something…i have googled and googled and cannot find what i’m referring to to get details but it’s miserable and if someone else knows what i’m talking about let me know.

And now what was wrong with today…

My issues here are entirely separate to the actual water charges problem by the way. I guess it relates more to the importance of accurate reporting, and the rights to protest. And wondering who’s been told what to do and what not do do and by whom.

1. The numbers debate for attendance. Some people seemed to think the accurate reporting of numbers wasn’t important. I can’t count a group to save my life but I walked in the midst of crowds, jam packed from d’olier street up to merrion square and on my way back, there were as many still on their way. I have never seen anything like this in Dublin. And it continued for the day, before and after me. Accurate reporting of this in the media suddenly becomes very important if an attempt to play down the numbers is being made. The Gardai apparently refused to issue an estimate, which the person tweeting about this noted, was the first time he remembers them ever doing that. There were also no aerial shots. Who’d have aerial shots? RTE and the guards? Which brings be to number 2.

2. What were RTE reporting? That a ‘missile’ (a plastic bottle) had been thrown at a guard. When the protest was peaceful and friendly. The only bad behaviour i saw was some overly angry yelling and a kid who kicked over sign. The person behind him promptly put it back up.

3. Next. The inability for the media (incl. world media) to get a shot of the giant mass of protestors outside Leinster House/The Dail, because that street was closed. A scroll through twitter pictures will give you the impression there were people out in the streets. It does  not convey the kind of significance of the turnout on a WEDNESDAY AFTERNOON, as a picture there would have. People politely yelled that they had a right to a peaceful protest. Guards responded that the protest was an ‘event’ that street was closed to that.

4. The incredibly weird riot police numbers. Rows and rows of them down Kildare street. For a protest that on the ground, was peaceful. This was awful for a few reasons. 1. It wasn’t necessary even IF a few people did kick off. A normal guarda presence would have been sufficient. 2. I think it actually made people more angry because it was so overly defensive. 3. It looked to other people like this was a dangerous place to be. I at no point felt unsafe and that included standing a few people away from the barriers on kildare street.

5. The incredibly regular ambulance sirens. These seemed to go by every 15-25 mins despite not seeing any injuries, fights, event potential injuries or marked tension. It would be very very suspicious to think they were told to go by with sirens every so often. That’s taking my scepticism too far. But….I didn’t see what they were for at any point.

6. The trending twitter thing. That was the weirdest. I realised none of the associated hashtags were trending and thought little of it other than it must be because there were a few different ones on the go. Until other people started to twig it as well. And then noted that top trending hashtags had tweets coming with significantly less regularity than one single water protest hashtag. It popped in at number 10 shortly after people started tweeting about the fact that it wasn’t trending. That was even weird. For the hours it had been going on before that, it was weird. Even if volume of other hashtags was greater over a greater length of time. ‘Foggy’ was apparently even trending despite the fact that it wasn’t foggy. Twitter is cool and all. But they like the tax deal here. I had weird imagined conversations in my head like, “Sorry Enda, we have to let them trend somewhere or we’ll ruin our rep. We’ll slot it in at 10, and give them 8 for a little while later.” “Alright lads. You know best.xxxx Enda. ps. please don’t leave me.”

2 thoughts on “#Right2Water Protest, So Many Things I Feel Weird About”