The Origin of Birthday Candles – A Guest Post by Leah Carri 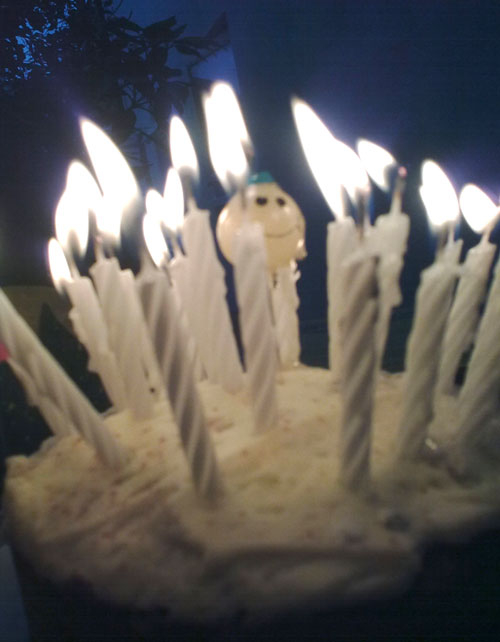 The Origin of Birthday Candles

It’s funny how we just go along with traditions isn’t it? There are so many things that we do that we’ve never really given much thought to “why?”, especially when it’s something that we’ve done all our lives. And something that everyone else we know does too. We do it because, well, because, that’s just what you do -like birthday candles. The Germans invented them – did you know that? No, me neither, I just learnt it off Wikipedia. I imagine it was an enthusiastic father who was a bit of an arsonist who came up with the idea. Yeah. Think about it.

The following would have been in German, obviously.

– Lovely chocolate cake Frieda, looks like it took you ages to make. And the icing looks beautiful. You’ve piped the words “Herzlichen Glückwunsch zum Geburtstag” in it so carefully and neatly. And I love the little sugar roses, and the Smarties and the hundreds and thousands. But still, it’s missing something; I can’t quite put my finger on it.

Hans thinks for a moment.

– You want to light a fire on my cake?

– Yes. Actually, I think it needs more than one.

– You want to light more than one fire, on top of this cake that I have spent five hours making?

– How many fires do you think it needs?

– I’m not sure. What age is little Ludwig? Six. Let’s light six fires.

– Do you not think that maybe it’s a bit dangerous? I mean, it is a children’s party. And the cake’s chocolate, it’s going to melt.

– Good point. We’ll just light them for a little while and then put them out.

– What are you going to do? Pour a bucket of water over my cake?

– You are not pouring a bucket of water over the cake.

– Maybe we could just blow them out?

And so Frieda being the understanding and accommodating wife that she is allows Hans to light six little fires on top of her beautiful cake and they head into the dining room where the birthday boy and his guests are waiting.

Now you must imagine that at this inaugural, primitive first ever birthday candles event, people were not sure how to react. They did not burst into an out of tune rendition of “Happy Birthday to you….” I’m not sure that song had even been written then (I haven’t read all of Wikipedia). And plus that song is in English and these people are German. No, what greeted Hans and Frieda was a stunned silence.

Most of the gathered parents of the birthday boys friends had always found the Schmidt’s to be mildly eccentric but this was craziness. The adults felt awkward. Should they say something? Hans looked so happy and Frieda seemed quite content with the situation. Did they not realise the cake was on fire? One brave father stepped forward with his hanky to try to put it out before they reached the table of captivated and confused kinder, but Hans blocked him with his arm, protecting the cake.

– No. This is Ludwig’s special treat.

Young Ludwig had not inherited his father’s pyromaniac tendencies and as the flaming cake neared the top of the table he started to cry. It was his party. He could do that if he wanted to. You probably would have too if this happened to you. His parents were ruining his special day.

Hans placed the still burning cake in front of Ludwig. Ludwig turned his faced away and let out a loud sob. Hans could feel the eyes of the room on him now. His young son was distraught. The party guests were not impressed by this trick.

Ludwig loved wishes. This got his attention. Hans was thinking on his feet.

– Quickly. Make a wish and blow them out, if you get them all out, your wish will come true.

If there was one thing Ludwig would not miss out on it was a wish. You name it, stars, chicken bones, the kid was mad for wishes. He sucked in a big deep breath and puffed and spluttered across the chocolate icing. A mixture of tears, snot and the air from his little six year old lungs extinguished the fiery cake. He smiled. The relief of this awkward situation being over washed across the room and a loud cheer erupted from the gathered guests. They continued to clap as Frieda divided the cake onto plates and passed it around. The children lashed into it. The adults gingerly picked off the slightly charred and teary top part. It wasn’t such a bad party after all.

By the end of the party, this happiness and celebration had outweighed the previously traumatic first impression of the fiery cake and children were asking their parents if they could have a fire on their cake at their birthday party. And the parents were saying “we’ll see”. They thanked Hans and Frieda for a wonderful afternoon – “so unusual” – while secretly cursing them for this new precedent they had set.

And that’s how the tradition of birthday candles started (I imagine) as many parents find it very hard to say no to a tantrum threatening child on his or her birthday. And soon even the most sensible of parents, who were adamant that lighting fires was in no way an appropriate combination with large groups of hyperactive children and high quality confectionary, were also bowing to the “but everyone else had one” pressure.